Christmas is often celebrated at a well-set table, with plenty of everything, rich of flavor and choice, lately occasionally vegetarian. However, traditional Christmas roasts rely on an essential animal ingredient. And the production of that ingredient, depending on the animal, has changed since 2010.

However, the livestock does not tell the whole story of what is going to be served at Christmas.

The slaughter volume, shown in Figure 1, are for pigs, cattle, and chicken a mirrored image of the livestock development. The slaughter volume of ducks is steadily decreasing since 2012. This change in production quantity can be sign of a change in consumer behavior, e.g. taste or trend.

For turkeys and, but more evident for geese, we can observe a strong seasonality in production. Since the peaks for both are in December, paired with the number of recipes for roasts of these particular animals, this is strong evidence suggesting them for main ingredients on Christmas dinner tables. 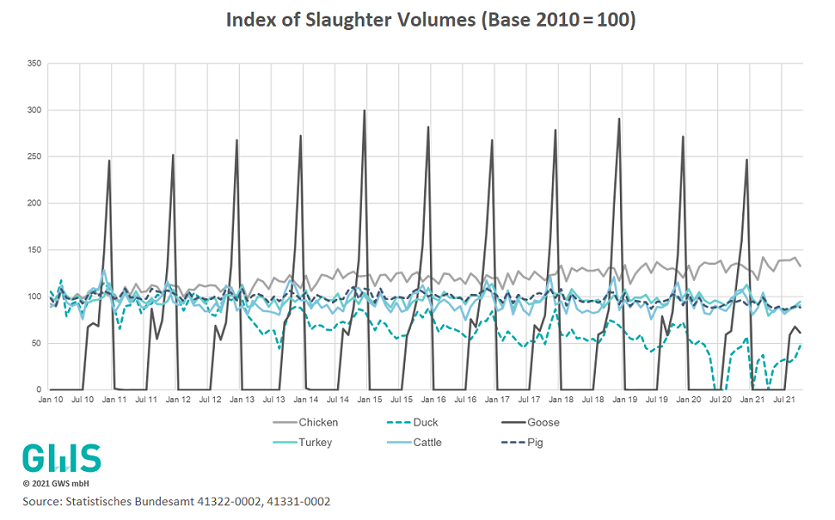 Although, the amount of domestic geese production has increased over the last 10 years, this year’s goose is in danger. Avian influenza (bird flu) and insufficient supply of goslings lead to lower production of geese, already seen in the slaughtering volumes of nearly 50% less than in last year’s October.

For that reason, the domestically grown roasted geese become rare this year and due to the bad harvest from the very dry last year more expensive. Our neighboring countries suffer from the same problems, resulting in low volumes of import geese.

If this year’s roasted goose is not available, the slaughter volumes may guide to a different roast, like for example the lately unpopular duck, in case vegetarian is no option.

However the choice of meal, and the associated problems, the GWS wishes you beautiful Christmas days.