The protection of the environment is an important economic factor in Germany. Therefore, there is a high demand for professionals with specific expertise in this area. However, the regional distribution of job advertisements for such employees differs across Germany – as can be seen on the map below.

When analysing job vacancy advertisements on the website www.greenjobs.de for professionals with specific environmental expertise,[1] one can see that in 2016 a high number of employees are being sought in Berlin. Apart from the district of Aurich, there is a high concentration of advertisements for “green jobs“ in urban regions. Hence, the number of ads is relatively high in the cities of Hamburg, Munich, Düsseldorf, Potsdam, Stuttgart and Leipzig.

Persons searching for a “green job“ have a wider choice in the north of Germany because more “green jobs“ are advertised in northern regions than in the south. Besides, the number of advertisements for job vacancies is relatively high in some rural areas such as the districts of Nordfriesland (Schleswig-Holstein) and the Uckermark (Brandenburg).[2] 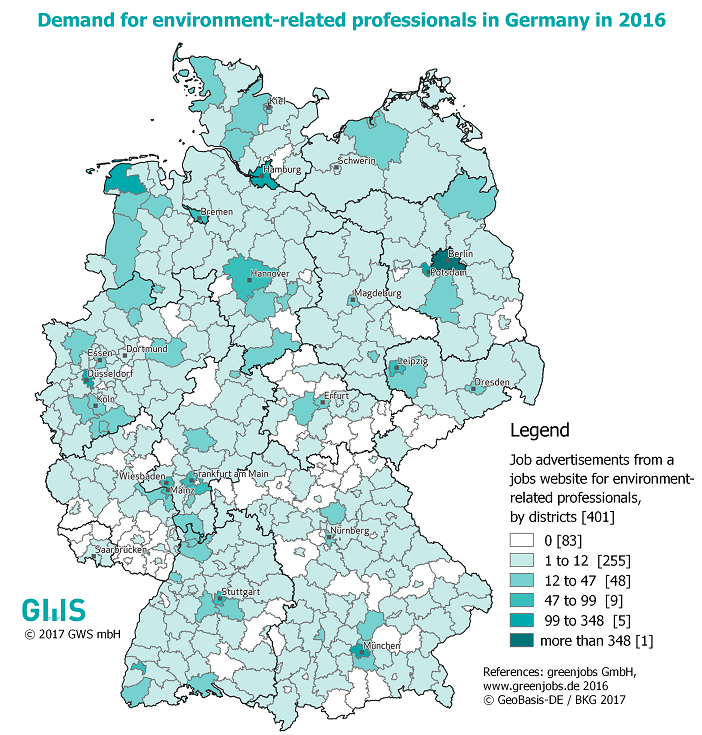 However, there are hardly any advertisements for “green jobs“ around the Saarland and in the northern part of Oberfranken (Thüringen).

In the majority of districts, one to twelve “green jobs” are advertised. The distribution displayed on the map considers all job advertisements published on “greenjobs.de” in 2016 (about 5,000). Because some vacancies are filled internally and ads are also placed on other websites (e.g. “Jobbörse” of the Federal Employment Agency), the number of “green job” vacancies is likely to be far higher than indicated on the map.

[1] To be placed on this website, either the jobs offered have to require specific environment-related qualifications or the company that is advertising vacancies has to be active in the environmental sector.

[2] The numbers for the districts Aurich and Nordfriesland are highly affected by two big wind industry companies that are located within these districts.