In the current discussion about rising interest rates, looking at the affordability of single-family homes[1], measured by the price-income ratio, offers an approximation of the extent to which borrowers may be affected. During the low-interest phase, buyers were increasingly willing to pay higher and higher prices, as interest payments had little impact on monthly instalments. With the interest rate turnaround, the cost situation is changing and thus price increases are likely to lose speed in the medium term and possibly even stagnate. In the case of buyers with a high loan-to-value ratio, the interest burden could lead to a situation where they are no longer able to service their debt and thus have to sell their property again. In already overheated markets, the risk of not achieving the expected price is greater. Such an overheated situation is higher in regions where wages have diverged particularly strongly from purchase prices than in the average municipality. 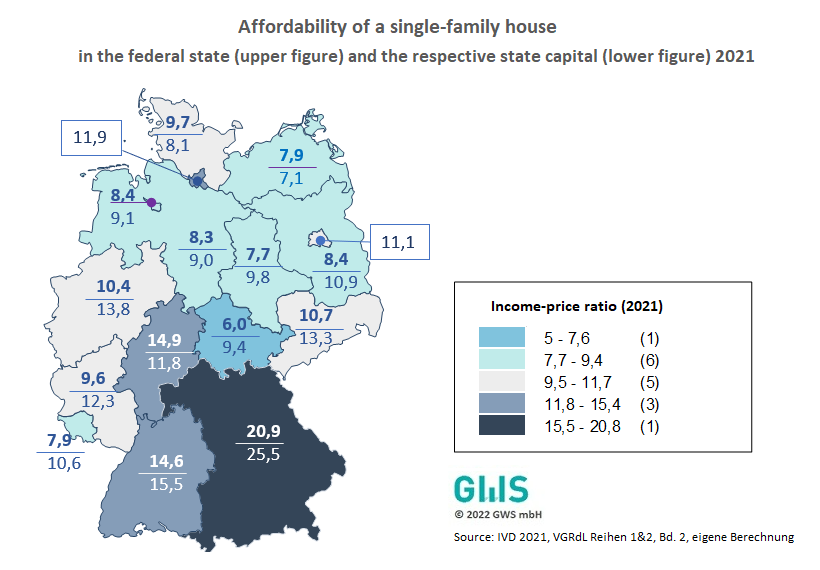 Buying a detached house is most expensive in the two southern German states together with Hesse, Hamburg and Berlin. These five federal states have not left their position as high-price regions within the federal states for over ten years.

At the level of the state capitals, the south again spearheads the lowest affordability with Munich and Stuttgart, followed by Düsseldorf, Mainz and Dresden. In these state capitals, buying property thus requires an even higher wage share than in the expensive city states of Berlin and Hamburg. Schwerin offers the highest affordability, where only seven times the gross regional income is required for a comparable single-family house. What is striking about Mecklenburg-Western Pomerania is not only the low price-income ratio but also the small difference between the state capital and the area. Except of tourist hotspots, property prices in the area vary only slightly.

GWS at the EU conference on modelling for policy support: recordings and presentations now available

GWS has contributed to two sessions of the 2021 EU Conference on modelling for policy support, which took place online from 22 to 26 November and was organised by the European Commission's…

Our figure of the month 03/2022: German-Russian Import Dependence

The EU's four sanctions packages against Russia were adopted quickly and in great unity. In the meantime, sanctioned Russian banks have also been partially…