In Germany, millions of working people commute between home and work every day. Despite the past two Covid years, the trend toward commuting is unbroken and the number of commuters continues to rise. At the same time, the car remains the most important means of transport for them: according to the latest data from the microcensus, almost 67% of commuters used a car to get to work in 2020. In 2016, when the statistics were last published before 2020, the proportion was slightly higher at 68%.

Bicycles, on the other hand, are becoming increasingly popular among commuters: Almost 10% used it in 2020, and the e-bike or pedelec, which appears in the statistics for the first time, is the mode of transport of choice for 1% of all commuters. Compared to 2016, the share of cyclists is only about one percent higher. Nevertheless, the increase is remarkable, since at the same time the average distance traveled was higher and amounted to about 15 km. The share of pedestrians among commuters has decreased accordingly.

Around 13% of employees regularly traveled to work by public transport (rail, suburban and subway trains, streetcars, buses) in 2020. This share fell by around one percentage point compared to 2016, which may be due to the impact of the pandemic. Against the background that public transport is supposed to make an important contribution to more sustainable mobility, this development must nevertheless be viewed critically. In particular, the German government has high hopes for the railroads as a core element of climate-friendly mobility. Improvements in capacity and quality are intended to make rail transport much more attractive.

It remains to be seen whether politics will succeed in reversing the trend after the pandemic and attract more commuters to public mobility services. In bicycle traffic, the statistics already indicate that a positive development is taking place, and the first small declines can also be observed in the use of motorized private transport. 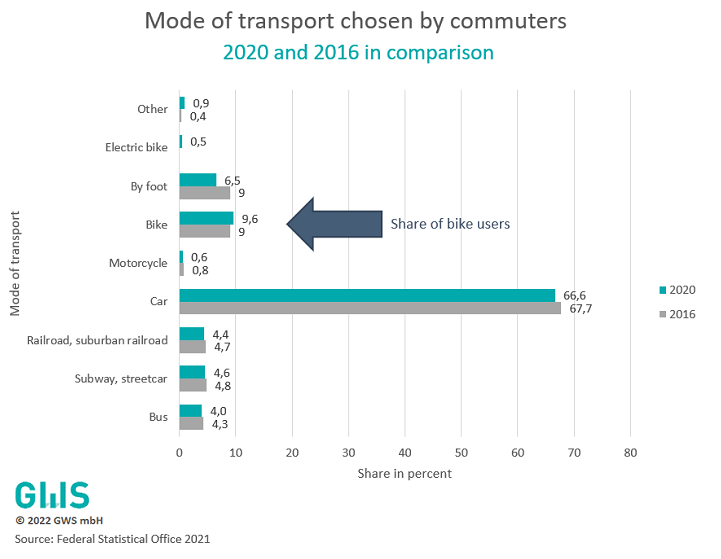 All figures shown are based on statistics from the Federal Statistical Office's microcensus, which was last published at the end of 2021 with data for 2020. The microcensus is a representative 1% sample of all households in Germany. Every four years, it collects information on the commuting behavior of working people, including their mode of transport, although this information is not mandatory.