Gross electricity consumption was 577 TWh in 2019 ([1]; the values for 2020 are not used in the following version due to the distortion caused by the Corona crisis). The old German government still assumed an almost unchanged electricity demand until mid-2021 of 580 TWh until 2030. 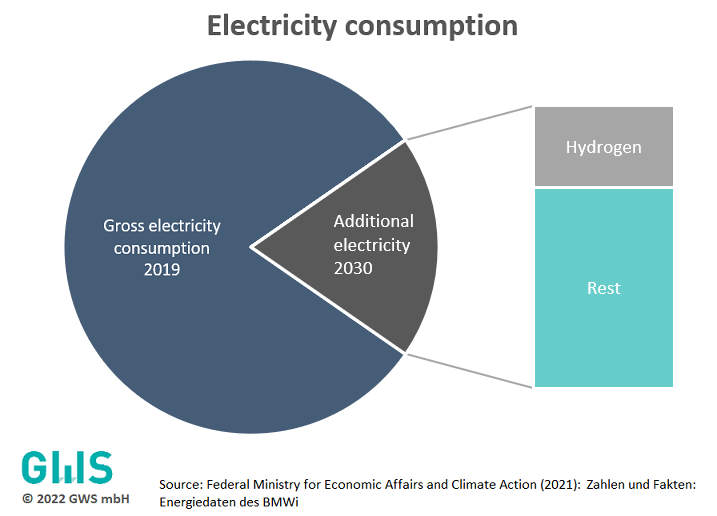 However, the goal of climate neutrality requires a shift toward an electricity-based economy. Electromobility, heat pumps, and electrolysers, for example, are replacing technologies that were previously based on direct and indirect use of fossil fuels. Energy efficiency improvements will not be sufficient to keep overall electricity demand constant. Accordingly, the Ministry of Economics has already revised its forecast of future electricity demand upward in mid-2021. The new federal government now assumes gross electricity consumption of 715 TWh in 2030 [2].

This month's figure suggests where the challenges of transitioning to an electricity-based economy lie. The conversion to a small hydrogen-based economy alone entails electricity requirements that are very large. Either hydrogen can only be a supplement on the path to conversion, or enormous efforts in renewable energy development, high import requirements of hydrogen, or the use of blue hydrogen (natural gas-based hydrogen with capture and reuse of CO2) are possible alternatives.